Over-emphasis on the Fossil order of organisms, can sometimes be conflated with the evolution theory.

Evolutionists will commonly ask, "Why isn't there a human in the Cambrian rocks?"

It can be hard to spot the fallacy, but it's a conflation of a theory with actual evidence. It can SEEM to favour evolutionists, but then that is the real trick isn't it.

Logically I can prove it doesn't favour evolution. on the below diagram I show a table with some balls I have scattered on to the table randomly. I have then split the table-top into three sections, and now, at a later stage somebody has come along and theorized that there is an order to the balls. That they tend to go, left to right, from red colour to blue, and then to green. If the person that believed that theory then said, "now you must show a green ball to be  found in the Pre-Cambrian section of the table!", would they be right to make that demand?

They would be wrong because I actually wouldn't find a green ball in the Pre-Cambrian section of the table, because none were scattered there, and where they were scattered has nothing to do with their theory, which came after the scattering, and is a separate matter, logically. 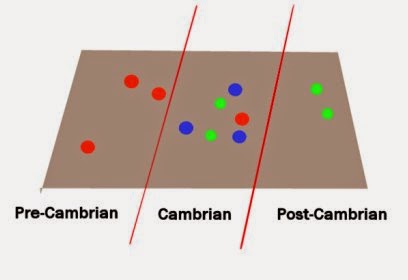 As you can see, the order of the balls has nothing to do with the theory of an order of balls. And in the very same way, evolution has nothing to do with what types of organism you will find in Cambrian rock. You can CLAIM there is an evolutionary reason for it, but as you see with my example, even if you can't find things you want to find, "out of place" this in itself proves precisely nothing.

You will never find a human in the Cambrian era because they did not happen to be preserved there. Largely marine life is preserved in that era. ( just like you wouldn't expect me to prove to you that you would find meat in a vegetarian restaurant but if you didn't know it was vegeterian when we entered the restaurant, that would be far more impressive. (predictive as opposed to none-predictive.)

Like with the restaurant, we already know the order of fossils.

The Fossil Order and the Ideal Archetypes both preceded Darwin's theory, and are both posteriori (after the knowledge) facts. These two posteriori set of facts are now conflated, and the fossil order is synonymous with an evolutionary order, and ideal archetypes are now referred to as homologies. But as you can see, both set of facts were known before evolution and shouldn't be regarded as examples of evolution.
Posted by the wiz at 11:33